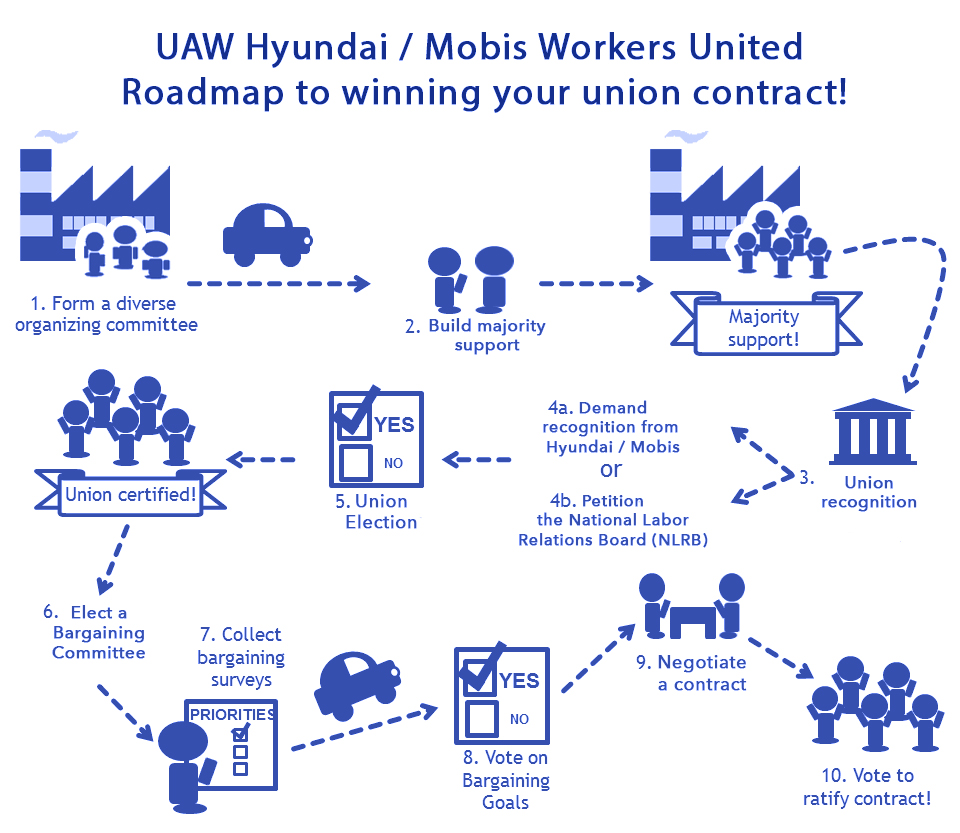 There are two possible routes to your union: the company can agree to a free and fair process for certifying your union, or you and your co-workers can seek certification through an election supervised by the National Labor Relations Board (NLRB). Under either scenario, building and maintaining strong majority support for a union among your co-workers will drive the success of the campaign and make your union more democratic and representative.

Your organizing campaign can be broken down into these broad steps:

1) Form a Diverse Organizing Committee. This is made up of your co-workers who understand the issues you face at work. It is with your feedback they will work with you to  help organize your union. Organizing committee members answer questions, get the word out, build support, and help make strategic decisions about forming your union. They are there to hear your concerns and help in any way they can.

2) Build Majority Support. To build support for the union, the committee, with your help, collects signed union authorization cards from your co-workers. These cards establish the level of support for the union. Also, they provide a means of gathering up-to-date contact and work information from workers who support the union. These cards are ultimately used in the recognition or NLRB certification process.

3) Union Recognition. Once enough of your co-workers have signed union authorization cards (ideally a supermajority), you and your coworkers can establish the union one of two ways.

4a) Demand Recognition from the company. Approach the company and demand a fair process, free of intimidation, for certifying your union. The company will have the opportunity to do the right thing by simply agreeing to recognize your right to form a union.

4b) Petition the National Labor Relations Board (NLRB). If the company is unwilling to agree to a fair process for establishing your union, the International Union has your back. We will petition the National Labor Relations Board (NLRB), the federal agency responsible for certifying unions. We will deliver your signed union authorization cards to the board, which will compare them to a list of eligible workers provided by the company. If the NLRB verifies that enough workers  have signed authorization cards, the board will schedule an election.

5) Union Election. All eligible workers will be able to cast a vote to form a union. If a majority of your coworkers who participate in the election vote YES, your union will be certified.

6) Elect a Bargaining Committee. Once your union is certified, you and your coworkers will elect your bargaining committee. This committee will consist of coworkers from Hyundai / Mobis who are willing to take on the commitment of helping to negotiate your first contract.

7) Collect Bargaining Surveys. The bargaining committee will circulate surveys that members will use to tell the committee what they want to see in a contract.  This is an opportunity for your and all workers to describe the changes you would like to see in  working conditions, benefits and pay,  what health and safety steps are needed and what other policies will insure fairness and democracy.

8) Vote on Bargaining Goals. Based on bargaining survey responses, the bargaining committee will create a list of bargaining goals, which will be broad and all-encompassing. These goals must then be ratified by a vote of the membership.

9) Negotiate a Contract. With the priorities established in the bargaining survey, the committee will bargain a contract with the company.

10) Vote to Ratify the Contract. The bargaining committee will negotiate a draft contract, called a “tentative agreement,” with the company. You and other union members at your plant will then vote on the agreement. If you and your co-workers ratify it, then you have your first contract. If you reject it, then the bargaining committee will determine how to move forward.

10a) Union dues. You do not pay dues until you have ratified your first union contract.

11) Contract Enforcement, Election of Officers, and Governing Your Local Union. Once you and your co-workers have your first contract in place, you will elect officers and stewards, whose responsibility is to enforce the agreement. You will also vote on a set of bylaws which will determine how you govern your local and how you spend your dues.